I started as a driver in the suburbs. Suburban Alabama does not accommodate bicycles; the lanes are designed for the exclusive use of Ford F-150s. Even in my mid-size sedan, cyclists were always In The Way. A single bicycle could convert the steady flow of the two-lane highway between my town and the interstate into an infuriating crawl, as each driver waited for an opening in oncoming traffic to pass or cruised behind the cyclist at an excruciatingly slow pace.

Then I became a motorcycle rider. Before I hit the road I briefly wondered whether there was any affinity between cyclists and riders. Both are using two-wheeled vehicles; both operators are exposed to the elements; both ride “bikes.” I quickly learned the answer: No. There is no affinity. When riding a motorcycle, every other mode of transportation is objectively worse, more lame, less important, and the people who are behind the wheels or handles or whathaveyou are simply obstructive dweebs. The super-suave motorcyclist wave doesn’t even extend to scooter riders, much less bicyclists.

Most recently I became a pedestrian, walking over a mile each way to and from work on neighborhood and city sidewalks. I assumed that bike lanes could contain the bike riders, but again I was wrong. Few things are as unsettling as an unexpected bike whooshing by from behind while walking unawares. For an added dash of indignation, a cyclist friend explained to me how much more dangerous bicycling on a sidewalk is versus on a street. Fools! Hooligans! Be gone!

Now I face a new phase in my transportation tale. Last week I received a brand new bike to ride for my daily commute and to get around town without having to pay or fight for parking. I will join the club whose members have been my enemy; like Dylan’s Miss Lonely, I can no longer talk so loud or seem so proud. 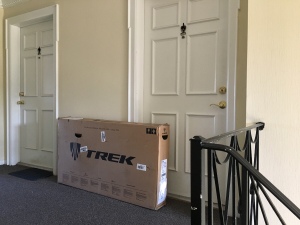 My mission is to be the cyclist I want to see in the world. This means learning the rules–both written and unwritten–of cycling etiquette, and following them mindfully. I have a lot of work to do (and gear to buy), but I think it is possible to ride a bicycle in such a way that annoys the fewest number of others.

The most weighty question remains: How will I regard other cyclists when I am, myself, a cyclist?