Here come a riddle. Here come a clue. If you were really smart, you’d know what to do. – Talking Heads ’77 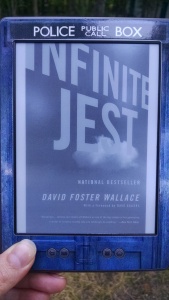 One lyric that typifies the style and charm of The Decemberists’ songbook comes from “Calamity Song,” in which a verse begins,

Hetty Green, Queen of supply-side bonhomie bone-drab (ya know what I mean?)

This line combines an obscure historical figure, some vocabulary words, the hint of death, and a humorous aside. (No, Colin, I don’t know what you mean.) Try to decipher the literal meaning of this line and you will lose the spirit of the song. Instead, if you allow the words to flow over you, the experience of listening to the song becomes greater than simply understanding the words. The danger of understanding the words to a song is that the story becomes dull; you already know what is going to happen. But when the words mean more than their denotation, when they are present as a collection to incite emotion, not just an established picture in the listener’s head, then the words can take on any number of meanings. Then the song does not grow stale, but grows in mystery and interest.

Infinite Jest (“IJ“) has a similar quality of elusiveness and mystery. Impossible to nail down as a straightforward narrative, the novel begs to be reread and reanalyzed and still keeps its secrets from even the most dedicated readers. Like listening to The Decemberists, I found that it was often more important to let the words glide by and to experience their effect than to stop and start and attempt to parse the explicit meaning of every phrase. This sentence from the mind of Hal Incandenza, for example, invokes a Decemberist-esque mix of highfalutin verbosity and informal phraseology: “At the horizon to the north a bulbous cone of picric clouds that gets taller by the hour as the Methuen-Andover border’s mammoth effectuators force northern MA’s combined oxides north against some sort of upper-air resistance, it looks like.” To quote Pemulis, “Jumbly polysyllables out the ass. Whole thing gave me a migraine.” [N.B. It is no coincidence that “Calamity Song” specifically resembles IJ. The lyrics were inspired by the novel, and the music video is a beautiful adaptation of the game of Eschaton played on Interdependence Day.]

Much of IJ is written in Hal’s voice, which is that of a hyper-intelligent teenager. Additionally, a lot of the novel is in the voice of less educated persons; people whose thoughts may not have Hal’s grounding in physics, calculus, literary theory, or whathaveyou, but do nonetheless have their own internal logic. Wallace takes the reader through the oftentimes hellish thoughtscapes of the poor, the abused, the addicted, the dregs. If you are anything like me, this is not your usual literary fare. My love of literature is strongly rooted in love of the language–well-crafted sentences, artful phrases, and prose that uses the rules of English to convey a meaning beyond its words. I prefer authors who play with the language. By a certain definition Wallace does this, but it is wordplay of a different breed and one that, frankly, makes me uncomfortable. Wallace delivers the narrative in the dialect of whichever character is central at the moment, and usually this is informal and heart-wrenching. By delivering the story directly from the heart of one of the soul-weary crowd that populates IJ, the reader tunes directly into the sentimentality of that person’s story. Instead of playing with the language, Wallace uses the language to play with the reader’s emotions.

One interesting technique Wallace employs is his style of progressively introducing characters. Most noticeably in the cases of Mario Incandenza and Joelle Van Dyne, the character is brought up with increasing levels of specificity ranging from a vague mention to the central figure. The first mention of the character is as an oblique personage; the character’s name and characteristics are unstated and the person plays a side role in another character’s story. Next, perhaps the character is named, but no specifics are revealed. The following interaction with the character may give the reader some background information about him or her. Finally, the story turns to focus on the character, with the narrative eventually being framed through that character’s thoughts. This technique is one of the many ways Wallace builds his novel on mysteries (who is this person he keeps bringing up?) and frustrations (why won’t he explain what this person’s deal is?). An additional level of complexity comes from having to keep track of these unknown characters as their appearances are in inconsistent and non-chronological contexts.

There is no denying the author’s mastery of the art form. Wallace uses wonderful language and crafts beautiful axioms, and his pages spill over with stories layered with detail and meaning. Sometimes, however, I can’t help but find that he spoils the flow by putting a joke or turn of phrase into the story for its own sake–as if he though up some clever idea and just wanted to put it somewhere. This is most alarming when the joke is not original to the author. The story of Gately and his burglar friend and what they did with the DA’s toothbrushes is an urban legend that predates IJ, and yet is presented as an actual occurrence. This calls into question the other interesting incidences and whether they were truly created by the author or simply repurposed. The old joke about the agnostic with dyslexia is certainly borrowed. I know that talent imitates and genius steals, but genius is supposed to do something new with its purloined goods. If nothing original is added, it just seems lazy. 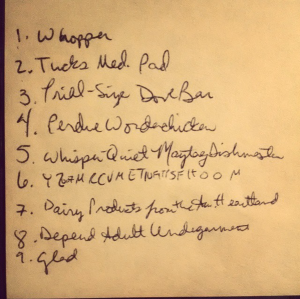 Having the year names on hand helped to decode the narrative’s chronology while reading.

An attempt to map out IJ geometrically would surely require an advanced understanding of differential equations and multiple dimensions, but there is a clean set of parallel lines underlying the narrative. Enfield Tennis Academy (“ETA”) and Ennet House Drug and Alcohol Recovery House (“Ennet House”), with nothing more than a hillside between them, stand as institutions aligned by their dedication to the principles of rigorous activity, mutual support, and self-discipline. Through this comparison, Wallace equates the rigors of professional athletics with the difficulty of life-long sobriety; both require an internal motivation that is developed first through external imposition.

Life in a teenage tennis academy is portrayed as relatively similar to life in a halfway house. Admission to ETA and to Ennet House involves an exacting interview process, and admittees bunk with others at like stages of their journey. The occupants–teenagers and recovering drug addicts–are not the most dependable people in the world, and a certain amount of leniency is granted for rulebreakers. Egregious behavior (e.g. drugging a classmate or inciting a full-scale, guns-drawn street brawl) is nonetheless grounds for expulsion into a less structured and less hopeful outside world. ETA graduates who do not make it to “the show” to play tennis professionally have the option of becoming a prorector, living on campus, and teaching the current students. Similarly, successful Ennet House residents, like Gately, can stay and work as live-in staffers.

Both ETA and Ennet House exist to fundamentally change their occupants, and life within each institution is thus characterized by a necessary strictness. Teens enter ETA as talented but unseasoned athletes, and the Academy enforces an exacting regimen controlling every aspect of their lives. For example, they only put down their forearm-pumping tennis balls to eat, and they are permitted sweets only once a year, on Interdependence Day. Ennet House, halfway between residents’ initial detox and full reentrance to the outside world, also imposes specific protocols for the betterment of its tenants. Residents are required to attend meetings, maintain employment, and complete their in-house assignments. The pleasures which both students and residents would naturally seek–lazing about, unwholesome food, mind-altering drugs, etc.–are altogether eliminated, and replaced with discipline.

Ideally, once residents have completed their stint at Ennet House, they have not only overcome their physical dependence on drugs, but have also overcome their emotional need for the release and escape drugs provide. Similarly, ETA wants to do more than physically train elite tennis players. The Academy also attempts to rid its students of their thirst for fame, thereby preparing the young athletes for the psychological hardships that come from discovering the empty promises of stardom. Live-in guru Lyle counsels young LaMont Chu, who envies the successful pro Michael Chang, against the desire for fame.

“You burn with hunger for food that does not exist.”

“This is good news?”

“The burning doesn’t go away?”

“What fire dies when you feed it? It is not fame itself they wish to deny you here. Trust them. There is much fear in fame. Terrible and heavy fear to be pulled and held, carried. Perhaps they want only to keep it off you until you weigh enough to pull it toward yourself.”

ETA trains students to become successful tennis players, and fame is expected to accompany that success. The Academy’s mission is to strengthen the players so that they can handle the fame when it comes. While residing in Ennet House, tenants essentially surrender their freedom to choose whether or not to consume drugs. Upon their departure, however, the choice is once again in their hands. That freedom of choice can be a heavy burden, and Ennet House’s mission is to strengthen its residents to handle that freedom without relapsing into old habits. The burning fire of drug addiction could be substituted in Lyle’s lecture for the students’ envy of fame. Feeding the fire, giving in to the desire for whatever drug one burns for, does not kill the fire because satisfaction in substances is a food that does not exist.

Like Hamlet for which it was named, Infinite Jest makes use of the supernatural to propel the story. Unlike Hamlet, which has a ghost in the first scene, IJ‘s inclusion of the supernatural lacks the proper foundation to be initially accepted. As I read, I admired the novel for its realism. Amazing things, incredible things, unlikely things happen, but they remain within the realm of the laws of the established universe. With the final supernatural occurrence, however, I was expected to believe something that exceeds the bounds previously established by the author. Explanation for this rift comes a little too late. As a reader, I had accepted a world of slight science fiction and of unlikely coincidence. Weird science could account for the defective monsters of the Concavity. Passionate realism could incite the bizarre terrorist organizations. Though some readers have attempted to explain the final phenomenon scientifically, the evidence indicates that the author intended the event to be taken literally, and the connection between IJ and Hamlet further supports this understanding. Perhaps the late appearance of this paranormal activity was born of a desire to surprise the reader and act as a moment of revelation, but it only sours the experience.

Infinite Jest is a long book; it is a confusing book. This novel is infinite because the beginning is the end and the end demands a return to the beginning and the novel is not complete without the two sides joining and flowing into one another. This novel is a jest because the reader does not know that she has been sucked into this neverending loop until it is too late. Admittedly, if there were not an internet community ready to explain the greater plot of the novel, I would be resentful of the author’s willful interruption of traditional story structure. As it exists, Infinite Jest is a fascinating, depressing, and prophetic work that I will never read again.

One thought on “In Review: Infinite Jest by David Foster Wallace”