Twenty Fourteen (2014) was a lousy year for the music industry, but it was a great year for my music collection. Allow me to recap the year with my Top Five Albums of 2014.

I bought this album after years of listening to Hot Fuss and muttering, to no one in particular, “Is ‘Jenny Was a Friend of Mine’ the greatest rock song of all time?” I heard “Human” on the radio like everyone else but withheld judgment thereon until I knew the song better. In the context of the full song and album, I’m now comfortable saying that it is a captivating, sweet song. I can say the same of the rest of the album. The Killers know how to put together a big sound, interesting chord structures, and stimulating lyrics. Day and Age has been my go-to gym album of 2014. It has the driving dance beat that befits physical activity, with more substance than your typical top 40 dance music. 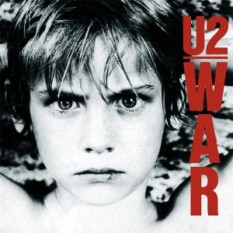 Until about twelve months ago, I knew exactly three (3) facts about U2:

When Adam Scott Aukerman began their comprehensive and encyclopedic compendium of all things U2, U Talkin’ U2 To Me?, I hopped on board as a chance to learn about the band. I now know many more facts (e.g. the names of the other band members, their history of collaboration with Ol’ Sourpuss Brian Eno, when Paul F. Tompkins first heard of them) and even became interested in listening to their music myself.

I now own seven second-hand U2 albums (including Songs of Innocence, which was regifted by Tim Cook), and War is the stand-out. I like the loose energy of “The Refugee,” the hypnotic rhythm of “Drowning Man,” and the driving chorus of “Two Hearts Beat As One.” Each song has something special that catches my ear, whereas their other albums are made of less distinctive, more derivative tracks. War will stay in my rotation, but I don’t see U2 becoming a favorite any time soon.

While the rest of the country was lamenting the lack of a true Song of Summer, I beat the heat with this musical soundtrack. I saw the Rick Moranis movie version of LSOH years ago, but the reason I wanted this album was hearing Ben Schwartz and Scott Aukerman sing “Skid Row (Downtown)” on an episode of Comedy Bang! Bang! last summer. I felt an intense desire to sing along with their spontaneous duet, and pounced on this CD when I saw it at a second-hand store.

I love songs that tell stories, songs with clever lyrics, and songs that are funny, and LSOH is all of those things from top to bottom. The Greek chorus that guides the story is everything you want in a wise-beyond-their-years doo-wop trio. The evil bass of the conniving Audrey Two gives me chills, while the kewpie voice of Audrey prime makes my heart break. The Eastern European-sounding number “Mushnik & Son” perfectly captures the shopkeeper’s greed and Seymour’s naiveté, with devilish lines like “So, say you’ll incorporate with me.” Great story; great songs; great performances. N.B. This production contains the original, unhappy ending. I respect that.

I was in Austin, Texas for the first time last month, where I visited Waterloo Records. Visiting a cool shop in a cool city with cool people, I had to find something appropriately cool to purchase. I’ve known for some time that I would like the Talking Heads, and I figured ATX would be the place to jump into this cool band.

Fear of Music is better than I could have hoped. I’m crazy about David Bowie, and this album sounds like a sister to the later Scary Monsters (and Super Creeps). The sound and the mood give me chills, and the lyrics are funny, interesting, and meaningful. David Byrne’s emotional speak-singing portrays frustration, anxiety, exhaustion, desperation, or whatever else the song calls for, with believable intensity. Little moments, like Byrne’s grunts in “Animals” and his emphasis on “peanut butter” in “Life During Wartime,” make listening to Fear of Music feel like watching a well-acted play. This music makes me smile, and I cannot wait to press play on my next Talking Heads album.

I have been moving slowly through Elvis Costello’s discography and landed this year on album three. Album one, My Aim Is True, hit it out of the park for my tastes. I love his lyrics and the punk speed of his classic rock ‘n’ roll sound. Album two, This Year’s Model, was a stumbling block for me. Most of the songs blended together in my head, and the liberal use of his trademark sneer was distracting. Armed Forces brought me right back into the fold.

Armed Forces is immediately engaging and exciting, with lyrical and musical layers that demand listening on a loop. Costello’s lyrics tell whole stories and contain little clever nuggets that reward closer attention. His sound is bright and colorful, as in literal visual colors. I do not have synesthesia, but listening to this music stirs an energy that I can only describe in blues and yellows and greens and oranges. At the same time, this album makes me want to roll down the windows, crank up the volume, and belt out the songs while driving.

The spell of Armed Forces led me to revisit This Year’s Model. For whatever reason, I found This Year’s Model much more enjoyable after Armed Forces than after My Aim Is True. Armed Forces even enhanced my enjoyment of another performer this year, when the inimitable John Hodgman referred to and later played “Oliver’s Army” at his Birmingham show in September. Knowing the song was like a little gift; a small smile of fortune making my night sweeter. Armed Forces topped my chart this year because I listened to it more than any other album and because it made my life better.

a. Vauxhall and I (Morrissey 1994). Delightfully macabre, with several classic-Morrissey admonitions of people who like sunshine.

d. Gypsy (Tyne Daly, et al. 1989). Can’t say this album was a favorite, since I mostly skipped every song that didn’t feature Mama.