Erik Larson’s The Devil in the White City is a remarkable piece of pop history. 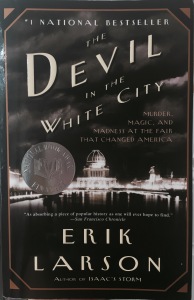 Larson takes two very different historical narratives–one bringing pride and hope to a city, the other leaving shame and fear –and sews them into one fascinating garment. I expected the serial killer to keep my interest, but I was pleasantly surprised to find the ins and outs of a group of architects (the collective noun is a “facade” of architects) similarly engaging.

Another surprise was The Devil in the White City revealing itself to be an inadvertent introduction to Ayn Rand’s The Fountainhead. Those who object to Objectivism may be surprised to find The Fountainhead palatable, even enjoyable. Written before Rand fully developed her signature philosophy, The Fountainhead is not concerned with the economic or political morality that is inextricably linked with Atlas Shrugged. Instead, The Fountainhead‘s ethical agenda is individual artistic integrity. Howard Roark is the superman who cannot be threatened or bribed to abandon his artistic architectural vision, and Rand makes a convincing case to draw the reader to his side.

Howard Roark is a wholly fictional personage, but his work and architectural

philosophy are based on that of Frank Lloyd Wright, who is a minor figure in The Devil in the White City. Wright was the protégé of Louis Sullivan, one the team of architects who designed The White City. The Devil in the White City touches on Sullivan’s proposition of “form follows function” (a fundamental principle of The Fountainhead) and lays out Sullivan’s decline. Rand clearly drew on Sullivan’s history for her novel. She fictionalized Sullivan as Roark’s mentor Henry Cameron: an architect who fell into poverty and obscurity because he did not have an audience for his work, and would not betray his ideals.

I never thought I needed to read a history book to understand The Fountainhead, but The Devil in the White City proves me wrong. Larson illustrates the forces at work in the world of American architecture in the early 20th century. The magnitude of the World’s Fair and the effect the The White City on the public’s architectural ideals were more powerful than I realized—Rand was not kidding around. The White City was the actual cause of a national nostalgia for a nonexistent classical past. 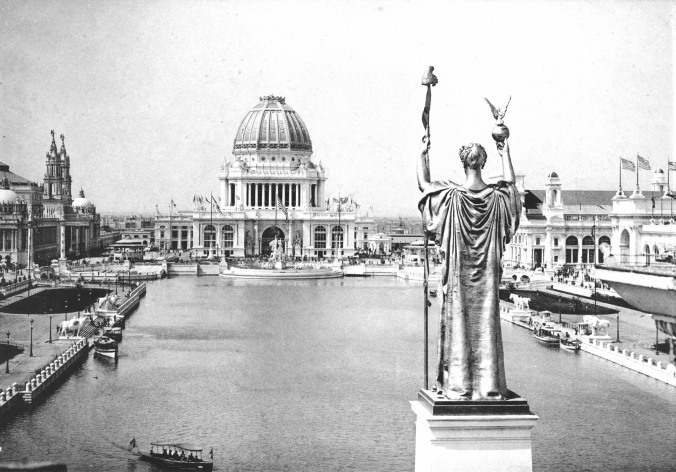 The Devil in the White City provides the background of the architectural milieu into which Roark is born. Throughout The Fountainhead, Rand ridicules the use of classical Greco-Roman architecture in 20th century America, and Roark fights this American obsession. Looking at this style through the lens of her trademark objectivity, Rand sees unnecessary ornamentation, spatial inefficiency, and sub-optimal design. In contrast, Larson lovingly describes the circumstances that brought The White City into existence and the reasons it took hold of the American imagination. The White City did not draw thousands of visitors from all over the country because they were interested in the functionality of its buildings; The White City brought people to Chicago for a display of American magnificence and the pride of knowing that their countrymen could create something beautiful on par with the grandeur of Europe. For good or for bad, these are feelings that Rand and Roark do not share.

The Devil in the White City stands on its own as an absorbing book of true crime and colorful history, but it also pairs well with The Fountainhead. Just as Rand’s philosophical writing is best balanced with counterpoints and differing arguments, Rand’s architectural opinions are subject to scrutiny. Readers of Rand are always at risk of developing insufferable superiority complexes, and The Devil in the White City provides a soothing antidote to Roarkitis.